“We strive not to make a religion out of an individual idea — we have to let go if it does not work.”

Sam Lundin was an investor in technology companies at an $8 billion hedge fund, with a focus on the Internet space. In 2011, he switched from investing to operating when he launched Vimbly to fix a personal pet peeve — the amount of time he would lose when researching & booking recreational activities. 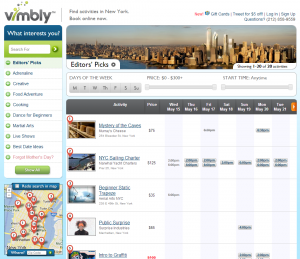 MO: How did you come up with the concept for Vimbly?

Sam: Two years ago I wanted to learn photography. I pulled up Google, typed in “NYC intro photography class”, and got a slew of results. But half of the places were in the wrong part of town. Some were starting at 2pm on a week day, and I simply couldn’t do that since I was working. Then there was a vendor nearby that looked perfect — but the class was $300 and five sessions. All I wanted was a simple $50 class that fit my schedule! Once I found it, I had to exchange three emails back and forth to confirm and lock it down. In total, this took three hours. There had to be an easier way.

Ten years ago people booked plane tickets by phone. Today we say “you really used to waste time calling airlines or travel agents? Instead we have Kayak.”

Ten years from now we’ll say “you really used to Google for three hours to book a photography class? Instead we have solution X.” There’s no doubt solution X will exist — the only question is who it is. At Vimbly, we come to work every day to build solution X.

MO: Can you talk about the process behind taking your idea and creating a business around it and any challenges that you faced early on?

Sam: Sure. The key issue early on was that we were creating a double-sided marketplace, so we had a chicken and egg problem. Users wouldn’t want to use a site that had no vendors to choose from, and vendors wouldn’t bother with a platform that had no users. Thus we needed to simultaneously seed both sides. The way we did this was through establishing a timeframe by which we would sign up a critical mass of vendors, while communicating to those vendors that the traffic from us would not come until three months later. This bought us time to populate both sides of the marketplace in lockstep. Of course, at first we didn’t have reach into as wide of a universe of vendors since we were restricted only to those who would take us up on the leap of faith!

Fortunately, since then, it’s become a lot easier to onboard vendors since we can clearly show them results very quickly.

MO: Why do you think that over 60% of people who try Vimbly are back within 3-4 weeks?

Sam: It likely comes down to our internal focus on what we refer to as “speed-to-solution.” In other words, on Vimbly, you can find the activity you’re looking for and be finished with the booking process within 10 minutes of pulling up the site. This process may otherwise take hours — as I saw with my photography experience mentioned earlier! Our research shows that, normally, 71% of people who intend on signing up for an activity end up changing their minds due to the hassle associated with the research and booking processes. Thus, by reducing the amount of time it takes to make the relevant booking, we are reducing the number of people who drop out of the funnel.

In other words, when people try the Vimbly interface, they appreciate the intuitive nature and immediate results, so it comes to mind when they are again on the market for an activity — be it a date idea or creative Mother’s Day gift.

MO: What’s one marketing strategy that’s worked really well for you so far?

Sam: Promoting virality has worked really well — for example, you can save $5 off a booking for tweeting about Vimbly. Importantly, it’s entirely optional. This means when users opt for this discount, it’s a win-win across the board — they get $5, they endorse something they actually believe in (generally after using the site a bit), and we gain exposure to their peers.

MO: Startups typically need to pivot and evolve their business model over time, especially as customers start to use the product or service. Can you provide some advice or lessons learned to entrepreneurs on pivoting while keeping your business moving forward at the same time?

Sam: Follow the numbers. We’re very quantitatively-oriented. The most important thing we focus on is constantly learning, and quantitative metrics enable us to concretely observe what works vs. what does not work. Gut feel is fine at first but then needs to be proven. Thus, we encourage new ideas, but we don’t get attached to the brainstorms — so we can move away quickly if the math doesn’t support the model. The worst thing possible is spending too much time on one particular test when it does not work because of taking too much pride in the idea. I come up with bad ideas all the time, but fortunately our process makes it easy to filter them out quickly since quantitative tests keep us from wandering astray. We strive not to make a religion out of an individual idea — we have to let go if it does not work.

MO: How have you been preparing for your expansion to five major metropolitan areas, followed by twenty more? How do you plan to scale the business so rapidly without becoming overwhelmed?

Sam: I view it in baby steps. We have been prospecting vendors in our target metropolitan areas, with the objective being to launch when we have just enough critical mass to provide sufficient value to local users, but not overkill this number and prevent us from launching sooner. This is the balance we are striving for.

More tangibly, we are in process of formally signing the relationships we’ll need for launch so that once we unveil the covers, the site will be fully operational in the new cities. Our system is pretty easy for vendors to use so we’re able to onboard a meaningful number of new activities relatively quickly.

The most important step is developing the process through which we’ll repeatedly launch new cities, and ideally do this quicker and quicker each time. Certainly this will be an iterative process and we’ll make plenty of mistakes.

Launching new cities is primarily a vendor relations effort, so it’s an area in which we are aggressively looking to hire.