“Sure enough, it worked every time – nearly always between 15% and 25% of customers accounted for more than 80% of profits (and usually it was 90%-plus).”

Richard Koch is the author of the widely popular book,  The 80/20 Principle: The Secret to Achieving More with Less, as well as 19 other books. He is a highly successful entrepreneur, whose ventures have included Filofax, Plymouth Gin, and Betfair. He was formerly a consultant with The Boston Consulting Group and a partner of Bain & Company, before co-founding LEK Consulting. 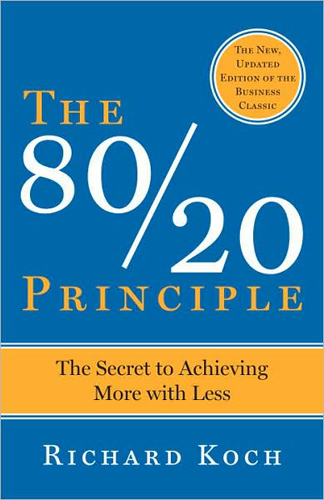 MO:
How did you come across the 80/20 Principle in your own life and what provided you with the evidence to be a firm believer?

Richard:
I was a teenager browsing in the Bodlean Library in Oxford. I’d been told to read a book written in 1896/7 by an Italian economist called Vilfredo Pareto. I expected to find it boring but actually found it fascinating, particularly where Pareto describes how wealth always follows pretty much the same pattern, whatever country or time period, where most wealth goes to a few people. From there I followed up to see whether twentieth-century economists though Pareto’s principle was valid. They did, though they couldn’t explain why it worked.

Well, I didn’t need to know that. I applied it the principle to my studies. For examinations, I was prepared to answer only a small number of questions. I knew nothing about a lot, but a lot about a little. Maybe I was lucky, but the approach worked like a dream, enabling me to get a good degree without a lot of work. From then on, I always asked myself, what was the most important thing to know, the key that would unlock any puzzle. If you think hard about what is important, I found, you could always achieve much more with ordinary effort.
The evidence is all in the work of economists, and later, when I worked as a management consultant, I always conducted 80/20 analysis, to see which customers and products produced the most profits. Sure enough, it worked every time – nearly always between 15% and 25% of customers accounted for more than 80% of profits (and usually it was 90%-plus).
Some people say the principle is a rule of thumb, others that it is almost a scientific law – for example, the economist Josef Steindl said “For a very long time, the Pareto law has lumbered the economic scene like an erratic block on the landscape: an empirical law which nobody can explain.” I’m not sure which it is, rule of thumb or law, but I don’t much care. It works so well and makes life much richer in every way.

MO:
What would you say has been the biggest transformation you have witnessed from seeing a company or organization implement the principle?

Richard:
I’ve seen dozens of big firms double or triple profits from this kind of analysis, but the most dramatic case and the one that made most difference to me at the time was when some friends and I took control of Filofax, just as it was about to go bust. We applied the principle and found that the great majority of product lines were big loss-makers, but there were a few products that were profitable. We also found that more than half of Filofax’s costs were unnecessary, and that only a few of its markets were profitable. By focusing on the few product lines, markets, and processes where Filofax was profitable, we were able to quadruple volumes and halve prices within three years. When we eventually sold the company the investors made seven times their money.

MO:
Would you say that most successful people in business are using the 80/20 principle and might not even realize it?

Richard:
Yes. Most successful people have a knack of knowing what is important and obsessing about that, and letting everything else go hang. I suppose that is the most vital thing about the principle, but people who use it intuitively are only using a fraction of its power. For example, do they apply the principle in their personal lives? One thing I have found consistently is that only a few of our friends contribute most of our happiness, and yet we often don’t spend much time with those people.

MO:
What about that other 80% of input that only produces 20% of the output? Should those activities and efforts be eliminated or just reduced?

Richard:
It depends. Can they be made decently profitable? Often they can, by raising prices for example or cutting the cost to serve unprofitable product lines or customers. But there is no point in continuing with loss-making business. Often I advised clients to put back to 50% of their revenues – and double or triple their profits.
In our own lives, we often can’t eliminate all the activities that don’t make us happy. But on the other hand, we usually don’t try.

MO:
How would you suggest we each take a step back and look at our lives to apply the 80/20 principle? Is there a technique we can use and how often should we measure our results?

Richard:
Good question. If you’re aware of all the applications of the principle, it’s a good idea to take a weekly walk by yourself or with the dog and just reflect on whether you are really doing the most important things and what trivial things you could cut out from your life that don’t do anyone any good. I have a habit of having a glass of wine at 7pm every Sunday and thinking about that, sitting quietly under an old olive tree.
But if you’re not really familiar with all the applications of the principle, dip into my book whenever you have some idle time!

MO:
What are some books you have read on business related topics that you would recommend to business owners and entrepreneurs?

Richard:
I will answer your question twice, once for my own books and once for those of other writers. I hope you don’t mind and apologize for promoting my own books, but on the other hand I think that every entrepreneur should read The Star Principle – I wish someone had told me this before I started my ventures.
So here goes: the real authorities first. Note that many of these books are quite old, but really timeless in their value (the dates below are their first publication dates – later editions are available)

And now for my books in terms of relevance for entrepreneurs:
1. The Star Principle
2. Superconnect (coauthor: Greg Lockwood)
3. The Financial Times Guide to Strategy – 4th edition just out
4. The 80/20 Individual
5. The 80/20 Principle