This interview was made possible by our friends at DomainNameSales.com:

The marketplace for domain names.

Mavens & Moguls was founded by Paige Arnof-Fenn. Paige was formerly VP of marketing at Zipcar. She was responsible for all branding, corporate communications and corporate partnerships for the business and was instrumental in the fundraising efforts for this early stage company. Previously, she was VP of marketing at Inc.com before the company was sold to Bertelsmann. Prior to that she held the title of SVP of marketing and was a key member of the IPO team at Launch Media, an Internet start-up that went public in early 1999 and was later sold to Yahoo. 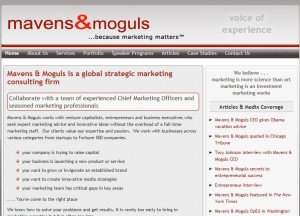 MO: What influenced your decision to leave your corporate life behind and start your own marketing firm? How did you find the transition process of having unlimited resources at your disposal to having to do everything yourself?

Paige: It was a gradual process. The first chapter of my career was in corporate marketing within Fortune 500 companies where budgets were large there was lots of staff and infrastructure in place. Then I moved to the startup world where I was the head of the marketing department and built the team from the ground floor. Budgets were significantly smaller and the teams were lean. With Mavens & Moguls I started my own firm and self-funded it but since I made this transition over 15 years it has felt very natural and comfortable actually. The world has changed a lot during my career and I saw an opportunity to bring world-class marketing talent to smaller and emerging companies that valued the experience without all the overhead. I joke that I am the Accidental Entrepreneur, I never actually wrote a business plan for Mavens & Moguls before I started it!

MO: What were some of the biggest obstacles you faced when first developing your company and how did you overcome them?

Paige: Amazingly we really hit the ground running and had clients before I had even officially launched. I was never worried about failing, we were just too busy which is a great way to start a business. The biggest obstacle was that as we grew and became more successful I wanted to maintain our high quality and great value to our clients but some of the early people in the group were not growing with us. I kept raising the bar and refused to let big egos or high maintenance colleagues slow our growth which was tough to do but absolutely necessary because the majority of our work comes by referral and word of mouth. I cannot afford to let a bad apple spoil the bunch.

MO: What are the most common mistakes you see entrepreneurs make and what are some ways they could be corrected or avoided?

Paige: It is very easy to get distracted as an entrepreneur so you really have to stay focused on your key messages and business goals and not let noise in the system veer you off course. You have to stay in touch with your core audiences and make sure that you are not conducting market research with people who do not want to hurt your feelings or tell you the idea is bad. Talk to real customers who spend money on your product or service and really listen to what they are telling you. Also watch your cash flow because cash is king. I have seen entrepreneurs spend too much on the wrong things and really get burned. Also a hiring mistake can be incredibly costly so the saying to hire slowly and fire quickly is great advice.

MO: Have you always had an entrepreneurial streak? Who or what have inspired or influenced you during the course of your career so far?

Paige: If you had asked me in business school, I wanted to be a Fortune 500 CEO like a Meg Whitman or Carly Fiorina but as I climbed the corporate ladder and was on track for that type of career path I realized a more entrepreneurial career was more interesting and exciting to me. I was always the one trying to break, bend and change the rules at the big companies I worked for so in fact starting my own firm has been a lot of fun for me and a much better fit. I have now worked for myself 3 times longer than I ever lasted working for someone else so that says something!

MO: You’ve had a pretty impressive career so far. What professional accomplishment are you most proud of?

Paige: I feel very fortunate to have built Mavens & Moguls from scratch and continued to grow the brand during the “worst economy since the Great Depression.” I am proud to have created opportunities for so many talented people during such a volatile time and the results we have helped our clients achieve to increase their awareness and visibility and grow their bottom line. I have been able to use the platform of the Mavens & Moguls brand to speak at many high visibility conferences, write articles and be quoted in top media outlets and serve on the Board of several terrific organizations so I really have a lot to be proud about!

MO: What inspired you to help co-found Women Entrepreneurs in Science & Technology? What kind of tools and resources are you able to offer? Do you have any success stories to share?

Paige: I was on the founding Board of the Women Entrpreneurs in Science and Technology (WEST) when they opened their Boston Chapter. Was inspired to help get it off the ground by the woman who became the first Executive Director who has a PhD in Engineering from MIT. She felt that a group like WEST would inspire more women to go into hard sciences and be successful if they knew they had an organization to support their journey with opportunities for training and development and a safe environment to ask for coaching and advice and find mentors and career advocates. It was a stellar Board and I was honored to asked to be part of it. The chapter has grown significantly and has its third or fourth Director now so it has continued to be relevant and help many women in male dominated fields like science and technology and engineering accelerate their career growth and network with other amazing women.